Stay Up Late is 10! Celebrate with us at gig in Brighton on 6th Nov

Gig to celebrate 10 years of campaigning for people with a learning disability to have the right to stay up late.

Stay Up Late, is celebrating 10 years since it launched itself as an awareness campaign with a night of awesome live music.

Stay Up Late grew out of the experiences of the punk band Heavy Load, some of whom had a learning disability. Many of the band’s fans had learning disabilities too, and the band got frustrated at their audience having to leave early due to their support staff working inflexible shifts.

The anniversary will be celebrated on Sunday 6th November at the Green Door Store, Brighton with a night of incredible live music. The excellent line-up - spanning punk, indie rock and epic pop – comprises The Band of Holy Joy, Asbo Derek and The Revs.

As a campaign, Stay Up Late is more needed than ever before, with many would be party-goers with learning disabilities still unable to access the support that they need to go out in the evenings due to rigid support plans.

Although the campaign is still very needed, there have been huge successes during the last 10 years. Stay Up Late gained charity status in 2012 and now is the base for Gig Buddies – a project that links adults with a learning disability to a volunteer with similar musical tastes to go out together. And many care homes have seen the error of their ways and now support people to go out as late as they want in the evening.

Stay Up Late invite all music fans to come and celebrate their anniversary with them – all proceeds go to the charity’s on-going work, fighting to ensure that people with a learning disability can have real choice in their lives and be fully included in their communities. 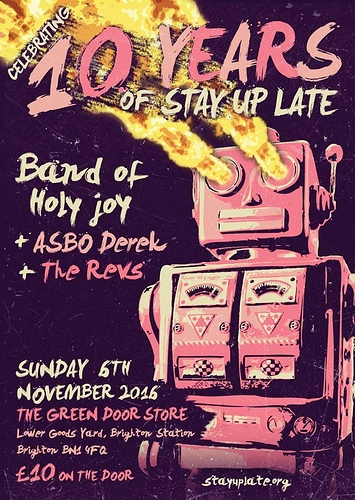